Economic Tailwinds: How India benefits the most from falling oil prices (even if they rise next year).

The question of which parts of Asia benefit most from falling crude oil prices can logically be divided into the first-order effect cheaper oil has on consumption patterns and supply-side fundamentals along with the second-order effect of incentivizing more strategic policymaking in affected countries. In the short-run, the former is certainly dominant – good policy takes a long time to gather momentum whereas consumer and investor behavior is more immediately sensitive to commodity prices. In the long-run, however, oil prices are unpredictable, and cannot be expected to maintain their descent, increasing the relative value of smarter policy that originates from falling oil prices.

Hence if we were to think about a country that benefits most from cheaper oil, it is critical to assess the relative policy sensitivity to falling oil prices, along with the more immediate stimulus to economic growth. To reach a conclusion without making any assumption on long-term equilibrium price of oil – well beyond the scope of this short essay – India is the most compelling beneficiary over the next 3-5 years.

To keep things simple, the objective metric of concern should be the effect oil prices have on long-term economic potential. This is a necessarily vague term, but provides a cogent framework for cross-country analysis and, furthermore, is correlated with a slew of other factors we might deem to be important (human development, infrastructure investment, general consumption, and investor confidence among other things). Another peripheral concern is the distributional effect of falling oil prices: is it reflected in a broad-based increase in consumer spending or a concentrated increase in corporate profits repatriated abroad.

As a hydrocarbon-starved importer, India stands to benefit immediately from falling oil prices, with more moderate inflation, increased consumer spending, and whetted investor appetite. However, the long-term value for India – more than any other Asian country – lies in nonlinearity of policy response. That is, politicians have been aching to slash fuel subsidies for over a decade but, with heady prices and a weak economy, unable to do so. A drastic fall in prices provides sufficient cover to end a regime of fuel subsidies definitively.

The nonlinearity arises from the fact that once subsidies are removed, even if oil prices return to previous highs, the barrier to return will be substantially higher, meaning the benefit of cheap oil goes well-beyond the ephemeral consumer boom that is sustainable only if oil remains cheap, a risky bet.

Asia, as a region, is very sensitive to oil prices. Aside from Malaysia and Australia, each major economy is an oil importer. Many have at least one of weak current account positions, high inflation, or asphyxiating funding costs. India was the rare exception that, this time last year, had all three.

This trifecta, in fact, is the result of a negative feedback cycle unique to India. Oil prices increase resulting in a higher current account deficit and an increase in fiscal deficit, as the government has real, not nominal, liabilities. Credit spreads rise, and foreign capital flees the more volatile market, resulting in depreciation. Since oil is priced in dollars, depreciation causes further increases in the twin deficits, and the cycle repeats, but with even higher crude prices.

While the logic of the feedback cycle is true in any country, few others were as immediately plagued by high inflation, a bad current account, declining fiscal balance, and depreciation at the same time, adding resilience. Further, because of in-kind government liabilities in India, normal correcting mechanisms fail. In most economic models, depreciation results in more exports, a stronger tax base, and ultimately economic stimulus.

This effect is subtly predicated on what economists call the Marshall-Lerner Condition, that the sum of the price elasticity of demand and price elasticity of supply for exports exceed one. Intuitively, if demand for an imported good is very inelastic, depreciation results in people paying more for the same thing, and a greater outflow of capital. In general, the MLC holds but because of the nature of India’s government commitments this is not always true. As economist Yu Hsing noted in the Global Economic Review using IMF data:

[The MLC] of the trade between the US and Hong Kong, India, Japan, Korea, Malaysia, Pakistan, Singapore, or Thailand is examined. In deriving the real exchange rate, both the relative CPI and PPI are considered. The results show that [the MLC is] inappropriate for India and Pakistan using the relative PPI.

The point of this data is that India was uniquely affected by high oil prices which prevented meaningful fiscal reform and wreaked monetary havoc in a manner specifically impossible in other Asian oil-importers such as Thailand, China, or Indonesia.

The logical conclusion, then, is that the sudden reversal in oil prices is both a huge economic boom – validated by lower CDS spreads and a fall in one-month forward implied volatility on the rupee – as well as a chance to break the negative feedback forever by permanently removing subsidies, something the government is well on its way to doing.

Indeed while subsidies are a problem in many emerging markets, only in India were they significant enough to distort the corrective mechanism of depreciation outright, making India a big winner in the recent plunge. In fact, according to The Economist, oil subsidies amount to 14% of all government spending, or 2.5% of GDP. Indeed, over 50% of the country’s fiscal deficit could be cleared by removing oil subsidies and, as the government estimates, each $1 fall in the price per barrel results in a $1 billion fall in the fiscal deficit.

Even in immediate sensitivity to falling prices, reporting from the Wall Street Journal suggests India leads the pack. 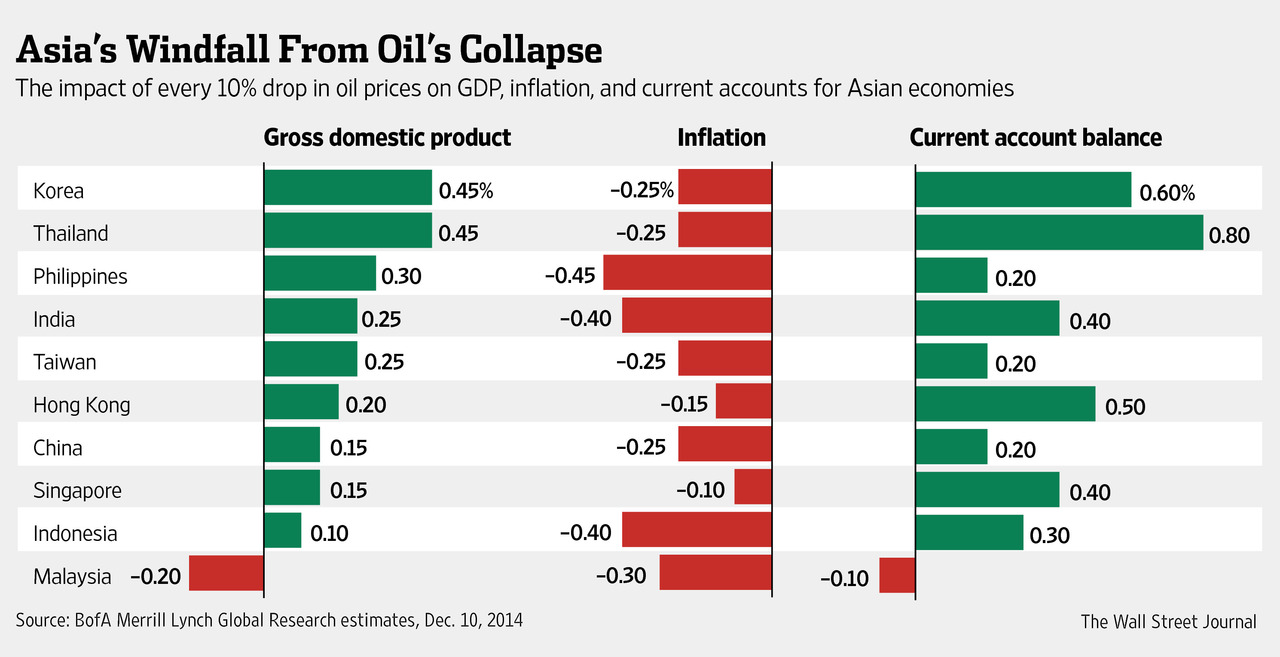 While in each of the categories other countries might appear to be more affected, any reasonable linear combination of the three indicators demonstrates that India, along with the Philippines, is the most broadly afflicted. Moreover, both Thailand and Korea have strong current accounts and tame inflation, overemphasizing the damage of a change by itself.

A final, and often unmentioned, policy boon from the mid-2014 decline in oil prices is the permanently greater central bank independence it afforded. When Raghuram Rajan, a previous critic of Reserve Bank of India policies that compromised its credibility, made greater independence and falling interest rates a hallmark of his first year. This meant, in a shock to international markets, keeping interest rates uncomfortably high, despite criticism from both the politically-motivated Finance ministry and the business community at large.

Indeed, criticism of delays in rate cuts despite falling inflation came to a head between economic advisor Subramanian Swamy, speaking for the center’s position in general, and Rajan this December, when the RBI unexpectedly maintained a high policy rate. Rajan shows no sign of relenting from his conservative monetary policy. While future developments remain uncertain, it is clear Rajan couldn’t have maintained this level of disinflation without further rate cuts against government pressure without the economic boon cheaper oil prices provide.

To the extent this is an exercise in a central bank regime shift – as Paul Volcker was in the 70s – more than a gradual policy change, this timely fall in oil prices is a discrete step in favor of further monetary independence, and more credible policy, that will not necessarily evaporate after a future increase in oil prices.

The sustained effect of lower oil prices also depends entirely on the composition of consumption growth. For India, over 90% of the increase in oil consumption is expected to be imported, unparalleled in similar countries. This is particularly important for countries where economic growth is often expressed through a greater reliance on oil, gas, and hydrocarbon consumption in general.

Other Asian countries – like Thailand, Korea, and China – are far enough ahead of India on the growth curve where a sudden constraint on further hydrocarbon consumption wouldn’t be catastrophic to further growth, especially as each is more reliant on investment, instead of consumption, for economic output.

So while Asian countries in general benefit from the fall in oil prices, India is best-poised to make the most of this potentially temporary decline in improving its public finances, creating an independent central bank, and restoring the corrective mechanism of free market international trade. India has, by a number of metrics, been uniquely shackled by high oil prices and an inability to change the policy thereof. Free from both, India has the most to gain from a decline in crude prices.